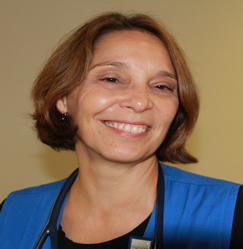 (Originally published August 8, 2011.) As the start of another school year fast approaches, a respiratory therapist with Self Regional Healthcare is part of a statewide effort to protect children with asthma. Each year as children return to the classroom there is a sizeable flare of asthma that sends some seeking medical attention, according to Martha Huddelson, a registered therapist with a bachelors’ degree in respiratory care who is also certified as an asthma educator. She serves as chairman of the South Carolina Asthma Alliance.

“Asthma is the most common chronic illness in children, affecting 1 out of every 10 youth in our country,” she said. “They need emergency treatments, may be hospitalized and miss school. Some may even die from their uncontrolled asthma.” For example, over the past three years Medicaid in South Carolina has seen a 42 percent increase in costs for childhood asthma for the months of August and September as compared to June and July. That increase has averaged about $1.2 million a year. “Self Regional is a part of Health Sciences South Carolina (HSSC), a research collaborative of which the Medical University of South Carolina (MUSC) is also a member,” Huddelson noted. “At MUSC Children’s Hospital in 2009 and 2010, there were seven times more admissions for children with asthma in August and September compared to July and June.”
She said an asthma attack occurs when the breathing tubes to the lungs get irritated and plug up, making it hard to breathe. The muscles surrounding these airways go into spasm, making the breathing tubes much smaller. An outpouring of mucus also blocks the breathing tubes. “The child gets short of breath, starts to breathe hard and coughs or wheezes,” Huddelson said. “Medicine is often prescribed to administer in the event of a bad attack, but breathing problems can persist in spite of the treatments. These can be last from a few days to more than a week.” A variety of factors come into play when children with asthma get sick, she continued. These include cold viruses, cigarette smoke, exposure to mold and other allergens, stress and anxiety as well as “bad air” near heavily traveled highways or streets. “Each individual child has his or her own set of ‘triggers’ that will set off an asthma attack,” Huddelson said. “It is important to note many children reach the new school year unprotected. They have done well over the summer and backed off from taking the medicines they need daily to control their asthma. This leaves the child vulnerable to whatever asthma triggers that come their way.” To deal with asthma in school children, the South Carolina Asthma Alliance has launched an initiative called “Summer Attack on Asthma.” It is designed to make the public more aware about childhood asthma, its impact and its control. “We also urge children with asthma to get back on their daily medicines now rather than to wait until they get sick,” Huddelson stated. “In addition, they need to see their primary health provider as soon as possible, plus they need to get their medicines and instruction sheets (Asthma Action Plans) to take to school so the school nurse, teacher and other staff will be able to help should the child become ill.”

“There is no cure for asthma,” she said. “It is a complex and widespread disease. But excellent care and control are available. It is crucial that patients and families use the preventive measures prescribed by their healthcare providers.”

Volunteer Service Runs in the Family