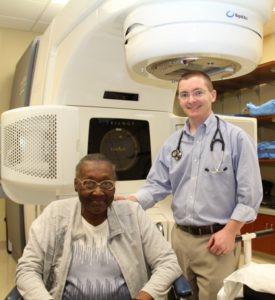 GREENWOOD – The new Self Regional Healthcare Cancer Center took another step forward this spring with the introduction of a new option in radiation oncology treatments.

Stereotactic body radiation therapy (SBRT), which delivers highly precise and concentrated radiation to a small area in the body, has now been administered to several area cancer patients.

Gladys Roundtree of the Promised Land community, a retired textile worker, was the first Self Regional Cancer Center patient to receive SBRT treatment, completing her therapy in March.

“I’ve had no side effects, and I’ve been very pleased with my treatments,” said Mrs. Roundtree, who has six children, 22 grandchildren and six great-grandchildren. “I felt a little bit special to be the first one to take this form of treatment, and I’m glad it was available here in Greenwood.”

The lung cancer patient, who was driven to the Cancer Center for treatments by a granddaughter every other day over a 10-day period, said she is spreading the word about stereotactic radiation.

“SBRT is well tolerated, completely painless and has shown excellent clinical results with minimal side effects to the patient,” Dr. Wood said. “A large, multi-institutional research group of radiation oncologists recently completed a clinical trial evaluating SBRT in stage I/II non small cell lung cancer patients who were medically inoperable for various reasons. Seventy patients were given SBRT and followed long term to monitor efficacy and toxicity. The results of the trial translate to a 98 percent local control rate.”

Data from some of the nation’s large cancer centers suggest SBRT may be as effective as surgery in early stage lung cancer patients. Dr. Wood said the main advantages are it is non-invasive, involves no recovery time or anesthesia and is painless.

“We now have the capability of focusing radiation treatments into very small areas and can limit the so-called collateral damage of surrounding structures,” Dr. Wood said. “This enables us to give much higher doses of radiation per session. A higher dose per session translates into a more intensive—some might say stronger—dose to the tumor when compared to conventional radiation treatments.”

“The new technology now available in the Self Regional Cancer Center also allows for four dimensional CT scanning, which accounts for the movement of the tumor with respiratory motion,” the radiation oncologist continued. “After all, the lungs are constantly moving as we breathe, and that means the tumors inside the lungs are also moving. This may lead to the tumor being missed by the radiation beams.”

Technology also allows the radiation beam to be turned on and off during certain phases of the breathing cycle, according to Dr. Wood. This ensures accuracy and is called ‘respiratory gaiting’ by clinicians.

“Traditionally surgery is recommended for early stage lung cancers because it produces the highest control rates and survival rates for patients healthy enough to withstand a procedure,” Dr. Wood said. “The problem is patients with long term cigarette use often suffer from poor lung function and other medical problems that prevent them from tolerating surgery.”

“We are very pleased to be able to offer SBRT as a new option at our Cancer Center,” he added. “We see it as another step forward for our patients, not unlike our recent affiliation with the Medical University of South Carolina for cancer research, which allows us to present our most complicated and challenging cases to experts in cancer treatment without having to send the patient all the way to Charleston and the delays that brings.”

While Mrs. Roundtree was the first SBRT patient at Self Regional, other patients of Dr. Wood and Dr. John Funke, his radiation oncologist colleague, have now followed in her footprints. Like her, they are genuinely appreciative of yet another advancement in the local fight against cancer.