(Greenwood, SC, Nov. 28, 2012) –Three future respiratory therapists have each been awarded scholarships from the Self Regional Healthcare Foundation to help fund their studies at Piedmont Technical College.

Two students—Shanna Bridges and Precious Logan—received the M. John and Drenda Heydel Respiratory Therapy Scholarship. The $1,000 annual scholarship is available to first and second year students, and is named in honor of former Self Regional Healthcare President and CEO John Heydel, and his wife.  Mr. Heydel is a former respiratory therapist.
Ms. Bridges is a McCormick native and this represents her second time being awarded the Heydel scholarship. She said she plans to continue her education after earning her associate’s degree in respiratory therapy, with a goal of earning a bachelor’s degree.
Ms. Logan is a first-year respiratory therapy student from Greenwood, and also plans to continue working toward a bachelor’s degree after earning her associate’s degree.

Honea Path native Christine Pilgrim was awarded the $500 Frank Spoone Memorial Respiratory Therapy Scholarship. Ms. Pilgrim is a second year Respiratory Therapy student. She says that she is interested in working at Self Regional Healthcare on a PRN basis while continuing to advance her skills and ultimately earn a bachelor’s degree.
The Spoone scholarship was established by friends and family of Frank Spoone, who was a longtime respiratory therapist at Self Regional who worked in the Neonatal Intensive Care Unit (NICU). 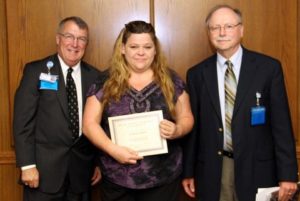 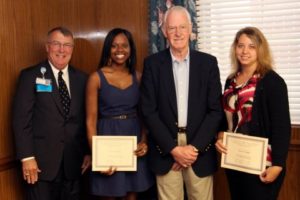