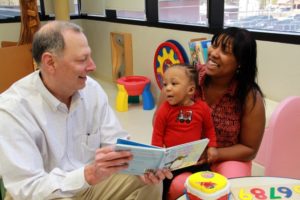 Neonatologist Terry Marshall, M.D., reads a story to his former patient, Jo’Noah, while his mother, Theresa Peterson, holds him. Jo’Noah was born at 23 weeks at Self Regional Medical Center and weighed just 1 lb. 6 ounces at birth. The little boy, who lives in Greenwood, is a natural jokester, according to his mom, and is growing and developing at a rapid pace.

(Greenwood, S.C., April 10, 2013) — Theresa Peterson of Greenwood was just 23 weeks pregnant when her son, Jo’Noah, was born. She had just gone for an ultrasound two weeks before, and had watched the computer screen to see images of a developing baby boy.

There was no sign of trouble until she started having early labor pains. She went to Self Regional Medical Center, and hours later, Jo’Noah was born on January 19, 2012, weighing just 1 lb. 6 oz., and requiring a ventilator because his lungs weren’t fully developed. At birth, Ms. Peterson said her baby wasn’t yet able to see or hear and she was told the first 24 hours would be critical.

On Saturday, April 27, 14-month-old Jo’Noah and his parents will join other Neonatal Intensive Care Unit (NICU) families for Self Regional’s NICU Baby Reunion celebration. The NICU doctors, nurses and other staff say they look forward to the chance to see their former patients and see how the children have gone from fighting for their lives to reaching for and achieving developmental milestones that many thought they would never accomplish.

To understand just how special each child that is cared for by the NICU is, here’s more of Jo’Noah’s story.

Jo’Noah spent 14 weeks in the NICU, and it was five weeks before his mom and dad were able to hold him. Ms. Peterson, who works for Quest Diagnostics, returned to her job after just one month of maternity leave. Her office, located on the second floor of Self Regional Medical Center, allowed her to be closer to her son, who she would visit during her lunch and other short breaks.

It was emotionally draining for Ms. Peterson to leave her baby each day, and the tablet device she carries with her has dozens of videos she took while Jo’Noah remained in the NICU.

“Each time I left him, I never knew if I would see him again (alive),” she said. “I would take a video of him in case it was the last time.” She credits Jo’Noah’s father, Thomas Hackett, and the staff of the NICU as being a source of strength for her during the incredible ordeal of having a baby engaged in a daily fight for his life.

Neonatologist Terry Marshall, M.D., was intimately involved in Jo’Noah’s care while he was in the NICU.

“I saw Jo’Noah at his earliest and when he was most critically ill,” said Dr. Marshall, who has been taking care of premature and babies born with other complications for more than 30 years. “When babies are born as small as Jo’Noah was, they spend a long time in the NICU, and we get to know them and their parents very well.”

While she was in the Army, Ms. Peterson said she was stationed in different places around the world including Australia, Korea and Guantanamo Bay; she was at the Pentagon during the Sept. 11, 2001 attacks. However, she needed to marshal a different level of strength and determination on a daily basis to have faith that her baby would survive the odds against him.

“I am very determined, but it was so hard,” she said. “My heart has been broken a million times thinking each time I left could be the last time I would see him. Many times the doctors and nurses prepared me for the worst, but his dad always believed he would survive…from day one.”

Today, Jo’Noah is an active toddler, and attends therapy to help him with speech and movement. Most days, he spends lots of time playing, crawling and giggling. He is very slow to cry, and his mom says he is extremely tough and resilient. “For him, the only way to go is up,” she said. “He has already been at rock bottom, and he made it out.”

About the 2013 NICU Reunion

All babies (and their parents) who were patients in Self Regional’s Neonatal Intensive Care Unit (NICU) are invited to attend the 2013 NICU Reunion on Saturday, April 27, from 10 a.m. to 11:30 a.m. at the Veranda, located inside the main entrance of Self Regional Medical Center. If you need additional information or have questions, please call Sharon Bagwell at (864) 725-4449.

“Having the NICU reunion is extremely special for me, and the other doctors, nurses, respiratory therapists and other support staff to see how the babies have grown and developed after they left the hospital,” said Dr. Marshall. “It’s a special feeling to know you have made such a huge difference in someone’s life.”
###