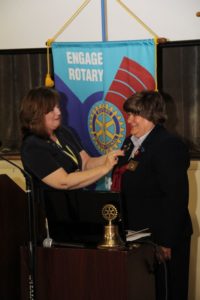 Lorraine Angelino of Greenwood is installed as the new Rotary District Governor during a special event held at Piedmont Technical College in June. Here, she receives a pin from Kim Gramling, the immediate past District Governor, who is from Seneca.

(Greenwood, S.C., July 19, 2013) — Lorraine Angelino of Greenwood has assumed the volunteer post of Rotary International district governor for 2013-2014. As governor, Angelino coordinates the community and international service projects for the 54 Rotary clubs in District 7750, which includes the western region of South Carolina. She assumed the office on July 1, and will serve through June 30, 2014. Angelino works in Information Systems and Technology at Self Regional Healthcare.

During an installation ceremony on June 15 at Piedmont Technical College, Angelino said her main goals are to “Do Good in the World, Engage Rotary and Change Lives, and Have Fun.” For the coming year, she is emphasizing water safety and literacy by engaging Rotarians to participate in a program called “Josh the Otter.” Rotarians will read to children in their communities about water safety and the importance of not going near the water without an adult. In some communities, local YMCAs are teaching young children to “float like an otter.” Water safety for young children is critical; drowning is the leading cause of death for infants and young children between the ages of 1-4 (U.S. Centers for Disease Control and Prevention, 2007).

Angelino is one of 532 Rotarians worldwide serving as a district governor this year. A member of the Rotary club of Emerald City for 11 years, Angelino will also be responsible for organizing new Rotary clubs and strengthening existing ones.

About Rotary Clubs in District 7750
Area Rotary clubs are involved in many local and international service activities. The Rotary Club of Emerald City for example, received a grant in 2006 and 2007 from The Rotary Foundation to build a baseball field and purchase the electronic scoreboard at the Greenwood YMCA. The Rotary Clubs of Emerald City and Greenwood have completed several joint projects such as the Rotary Room at the United Center for Community Center in Greenwood and “Stop Hunger Now.”  Stop Hunger Now has become a community wide project where Interact, Rotaract, Rotarians, and community members come together and package meals of rice, vegetables, and vitamins for people in areas such as Haiti and the Horn of Africa.

If you are interested in joining a Rotary club there are three clubs in Greenwood.

About Rotary International
The main objective of Rotary International is service, in the community and throughout the world. With more than 1.2 million members in 34,000 clubs worldwide, Rotary club members are volunteers who work locally, regionally, and internationally to combat hunger, improve health and sanitation, provide education and job training, promote peace, and eradicate polio under the motto Service Above Self.

Self Regional Healthcare Recognized For Stroke Care With Special Certificat...