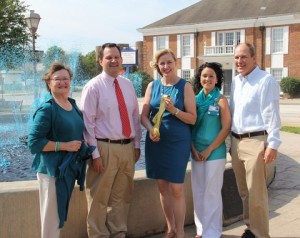 Ovarian cancer survivor Dianne Morgan has organized an awareness event on Sept. 22 to ensure other women know the signs and symptoms of ovarian cancer, which is often referred to as the “silent killer.”
Here Mrs. Morgan is joined by City Manager Charlie Barrineau, Meg Hawes from the South Carolina Ovarian Cancer Foundation, Self Regional Oncology Navigator Katie Davis and Greenwood Mayor Welborn Adams in front of the teal fountain in downtown Greenwood, colored in honor of Ovarian Cancer Awareness month.
The free event, which will feature remarks from Dr. Amy Forrest and Dr. Donald Wiper III, will be held at 3 p.m. on Sept. 22 at Alexander Hall at First Presbyterian Church of Greenwood.

(Greenwood, S.C., September 4, 2013) – Greenwood resident Dianne Morgan didn’t set out to become an ovarian cancer advocate. But she says the cancer that invaded her body several years ago has compelled her to reach out to other women and make sure they are aware of the signs and symptoms of the disease.

On Sunday, Sept. 22 at 3 p.m. at the First Presbyterian Church in Greenwood, Mrs. Morgan and representatives from the South Carolina Ovarian Cancer Foundation (SCOCF), Self Regional Healthcare and Circle 4 of the Presbyterian Women will present an awareness program designed to educate women about the cancer and factors that may elevate the risk for developing ovarian cancer.

Currently, there is no early detection test for ovarian cancer so it is important that women know the symptoms so they can alert their physician. Like all cancers, the rate of survival increases with early detection.

Guest speakers for the event are Dr. Amy Forrest from Greenwood OB-GYN and Dr. Donald Wiper III, chairman for the GHS Department of Obstetrics and Gynecology. Both Dr. Forrest and Dr. Wiper participated in Mrs. Morgan’s care and treatment. The ovarian cancer event is free, and light refreshments will be served. To receive additional information, call (864) 229-1773.

“My diagnosis came as such a shock to me because I had always been diligent about seeing my doctor for regular check-ups and taking steps to stay healthy,” said Mrs. Morgan. “The symptoms of ovarian cancer are often hard to detect because they are common to many other non-life-threatening conditions. If I had known the signs of ovarian cancer, I may have been able to find my cancer earlier. I’m lucky to be a three-year survivor, but after what I endured, I want to reach out and try to help other women so they have a better chance of early diagnosis and survival.”

Self Regional Named One of Nation’s Best Healthcare Workplaces for 3rd...
Scroll to top