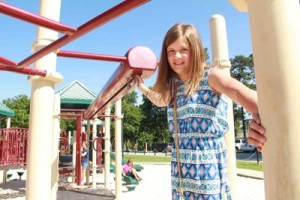 Skyelar Smith from Greenwood looks forward to the activities at Camp Porcupine each year, and having fun with other kids her age who understand what it’s like to balance the highs and lows of their blood sugar with swimming, climbing and archery.

(Greenwood, S.C., June 13, 2014) – Skyelar was just six when she found out she had Type I diabetes, a lifelong condition where the body does not produce insulin.

“I remember it being Christmas and we went to the hospital, where I was diagnosed,” she said. “I didn’t really know what was going on, and then we went and got all the stuff I needed.”

The little girl began regularly checking her blood sugar, monitoring her activity levels and giving herself shots of insulin.

About six months later, Skyelar became a camper at Camp Porcupine, Self Regional’s annual summer camp experience for children with diabetes. It was there that she finally encountered kids her age like her—ones who didn’t bat an eye at poking their finger to check their blood sugar or start counting out loud to determine their insulin dosage.

Her mom, Candice Smith, says the camp was a real turning point.

“The first year that she went, she cried so hard on the last day because she didn’t want to leave,” Smith said. “She told me ‘I’ve been around people just like me, and I’m going to miss my new friends.’ As a child, when you have something like diabetes, it can be difficult. You can feel like an outsider because you have to do things differently.”

Skyelar and the other children with diabetes are the reason that Self Regional’s Diabetes Educator Rebecca Wise has championed and organized Camp Porcupine for the past 21 years.

“So many children are being diagnosed with Type I and Type II diabetes now, and that diagnosis immediately changes their lives, and the lives of their family,” said Wise. “Camp Porcupine is a way that we can give them a summer camp experience that is safe and fun and spend time with other children who have to balance life with diabetes each day. It’s such an inspiration to see how they support each other, and how they thrive when they become part of a group.”

Over the years, the week-long camp has evolved, and is now held at the Greenwood YMCA. This year, it will be held at the Y from June 16-20 and include activities like archery, swimming and arts and crafts.

The 2014 camp will be 10-year-old Skyelar’s fourth time at Camp Porcupine.

“I really look forward to going swimming,” she said. “I have to take my pump off because it can’t get wet, but it’s a lot of fun to swim with the other kids.”

About Camp Porcupine:
Self Regional Healthcare’s camp for children with Type I and Type II diabetes
June 16-20, 2014 at Greenwood Family YMCA

Children pay $25 to attend; the Self Regional Healthcare Foundation provides financial support for the camp and scholarships for children who can’t afford the tuition.

About Self Regional Healthcare:
Self Regional Healthcare is a not-for-profit, regional referral hospital that provides care to residents of Greenwood, Abbeville, Laurens, Saluda, McCormick, Edgefield and Newberry counties. Services include prevention and wellness, acute care and tertiary care services including cancer care, neurosurgery, heart and vascular surgery, NICU, orthopedics and genetics. Self Medical Group is its employed physician affiliate network of 20 practices and more than 60 physicians.