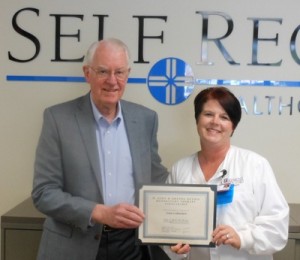 (Greenwood, S.C., Dec. 17, 2014) – The Self Regional Healthcare Foundation has announced that Newberry native Julie Culbertson is the recipient of the second M. John and Drenda Heydel Respiratory Therapy Scholarship. Culbertson is in her final year of the respiratory therapy program, and plans to work with Critical Care patients with her RT degree.

The $1,000 annual scholarship is available to first and second year students enrolled in the Respiratory Therapy program at Piedmont Technical College and is named in honor of former Self Regional Healthcare President and CEO, John Heydel, and his wife.

SRH Announces Another $268,770 In Community Grants