You are here: Home1 / Healthy Neighborhoods

This article was included in the “Your Community, Your Self” Community Benefits Report for Spring 2012. View the complete index of articles and content, or download the full PDF (four pages). 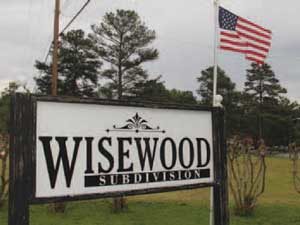 The past six years have seen some significant
and positive changes to Greenwood’s
Wisewood neighborhood.

Newly erected signs now proudly mark both entrances to the subdivision, which is home to about 200 residents. Lighted flag poles have been added for Fourth of July and other patriotic observances in the future. Neighborhood gardens have been planted and often provide ample produce not only for residents, but also for donations to the Greenwood County Food Bank and area senior citizens.

The neighborhood, located on the south side of Greenwood just east of the Mathews Mill Village, is canvassed regularly by volunteers who pick up roadside trash. Wisewood residents are in the process of placing new trash receptacles in strategic locations in the neighborhood.

The progress has not gone unnoticed. Twice Wisewood has been recognized with the Healthy Greenwood Neighborhoods’ Neighborhood of the Year Award.

None of it might have ever happened had it not been for Healthy Greenwood Neighborhoods (HGN), a not-for- profit organization which receives annual funding from Self Regional Healthcare’s Community Outreach Initiative. HGN in turn provides a hand up to residents in neighborhoods like Wisewood. This includes training in leadership and awareness of local agencies and organizations that could help with specific neighborhood issues, as well as grants to the neighborhoods for improvement projects.

Key to the success of the HGN approach is the use of the “ABCD” model or Asset Based Community Development. Leaders are identified among the neighborhood residents and their training includes knowledge about ABCD. An asset inventory identifies neighbors with training and interest in areas that would be valuable to solutions for neighborhood issues. For example, assets might include neighbors that can perform yard work, home repair, tutor, deliver meals, drive neighbors to dental or medical appointments, check on shut-ins, organize crime watches, etc.

“Our neighborhood has been actively involved with Healthy Greenwood Neighborhoods since 2006,” noted Anne Gunby, a Wisewood resident who serves as treasurer of the neighborhood association. “Before that our neighbor- hood was not organized. Nothing was being done to affect change or bring about any semblance of community and
cohesiveness.”

“I’m happy to report that has changed,” she continued. “Since becoming involved with HGN we’ve established an active neighborhood association. We have officers, a set of bylaws, we meet on a regular basis and, best of all, have been able to work together for some significant improvements in the place we call home.”

Mrs. Gunby, a Wisewood resident since 1978, said the neighborhood has since transitioned from one where most own their homes to one where the majority of people rent. A conscious effort has been made to sustain and upgrade property to maintain a quality of life similar to the neighborhood’s past.

“We emphasize property upkeep,” she said. “I believe it’s safe to say 98 percent of the folks in our neighborhood do conform. We’re still working and trying to figure out how to reach the rest.”

Asked if the Wisewood neighborhood of today is healthier than it was six years ago, Mrs. Gunby gives an affirmative nod.

“Definitely,” she answered. “We have a core group that’s really committed. We’re healthier. We’re safer. There are very few incidents and very seldom do we have a need to call in law enforcement. We’re not perfect, but no place is.”

Return to “Your Community, Your Self” index.