Flowers in full bloom at Self Regional 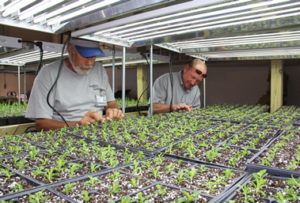 (Originally published June 15, 2011.) Flowers are in full bloom at Self Regional and a newly created landscaping project is to thank. The Grounds Maintenance department has initiated a project that allows them to grow their own plants instead of using outside companies.  The plants are grown from start to finish in an indoor greenhouse monitored daily by grounds maintenance. Tony McAlister, grounds superintendent, is very excited about the new project.

“Growing our own plants saves us about $10 a flat,” he said. “Where it would normally cost around $13 a flat with 36 flowers, we can now grow the same amount for only $3 a flat.” According to McAlister, the Grounds Department usually orders around 40 to 50 flats a year from outside companies. “Now that we are growing the flowers ourselves, we can double or even triple our numbers of flowers planted a year,” he pointed out. 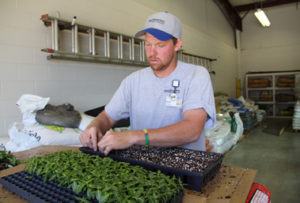 The grounds department growing plants from seed for use in Self Regional beautification and landscaping.

The process of growing the flowers is relatively quick.  According to McAlister, the germination process takes only a week, and then only another six weeks for the plants to become large enough to put in the ground.  So watch for the “Self” grown flowers around our beautiful hospital campus.