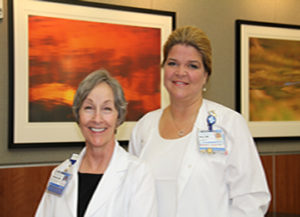 From left are Brenda Jones and Amy Surrett. The two are among 100 RNs across the state selected to receive the honor this year.

(Originally published June 11, 2011.)  Two registered nurses at Self Regional Healthcare have earned the Palmetto Gold Award for excellence in nursing and commitment to the profession. Among the 100 registered nurses from across South Carolina recognized for the prestigious honor in 2011 are Brenda Jones, APRN, Board Certified Clinical Nurse Specialist, and Amy Surrett, RN, Certified Wound/Ostomy/Continence Nurse.Mrs. Jones has spearheaded the hospital’s Spirit of Women initiative over the past year, reaching out to women concerning their health needs throughout the Lakelands region.  Mrs. Surrett has been a pivotal part of Self Regional’s efforts to prevent hospital acquired pressure ulcers

Proceeds from the Palmetto Gold Gala are donated to scholarships that support nurses throughout South Carolina. Since the program was established, thousands of dollars in nursing scholarships have been awarded to nursing students and more has been invested in the Palmetto Gold scholarship endowment. Previous Palmetto Gold winners from Self Regional over the past decade include Susie McAlister, John Paguntalan, Linda Phillips, Paula Smith and Rebecca Wise.

Self Regional Healthcare resolution adopted at SC House of Representatives

Flowers in full bloom at Self Regional
Scroll to top