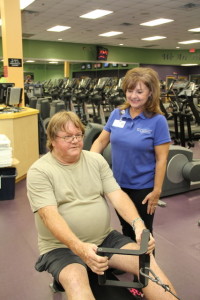 In just six months, Ronnie Turner says he has transformed his diet and his activity levels to allow him to manage his diabetes—for the first time since his initial diagnosis in 1977.

(Greenwood, S.C., November 14, 2013) – Ronnie Turner was just 22 years old when he was diagnosed with Type II diabetes. His hands would begin to shake and his body would unexpectedly start to jerk while he was running a doffer machine during third shift at Greenwood Mills. A visit to a local doctor confirmed a diabetes diagnosis, which he said wasn’t a surprise since his family, including his mother, grandmother and grandfather, had a history of battling the disease.

It’s taken numerous doctors, many different modifications to medication and 35 years for Ronnie to get to a place where he feels that he is now successfully managing his diabetes.

Along the way, he married and has three kids of his own, whom he worries may inherit a predisposition for diabetes and the complications and difficulty that come with managing a complex chronic disease.

“Many times, I would put my family before my need for medication,” he confesses. “I would try to use as little insulin as I could to make it last longer, because of the expense.” One year during a period of unemployment, he said he wiped out his savings to purchase the amount of insulin he needed– exceeding $11,000 in pharmacy costs for 12 months.

Due to the severity of his disease, Ronnie uses an insulin pump and has to use U500 insulin, which is a vial that is five times stronger than regular insulin and is used for individuals with extreme insulin resistance. The cost of the powerful drug is also elevated, with a retail cost of about $750 per vial, which should last Ronnie about a week, but he would often try to stretch it out for two.

On July 12, 2013, Ronnie was working as a customer service representative for Patient Financial Services at Self Regional, when he began to feel incredibly light-headed. He couldn’t walk—his legs felt heavy and useless like wet noodles. His sugar registered at 557 mg/dl (a normal fasting blood sugar is <100mg/dl). The next thing he knew, he was in the Emergency Care Center and was being told that he needed to reevaluate how he was managing his health. “The Emergency Care Center is the reason I’m here today,” he says. “If I hadn’t gotten there, I would have probably slipped into a coma and not come back out.”

Individuals with uncontrolled diabetes face other health risks, including heart disease and stroke, hypertension, blindness and eye disease, kidney disease, nervous system disease and amputation. Ronnie said he had open-heart surgery at age 43 and faces pain on a daily basis related to having three different types of arthritis.

While he was in the hospital, Dr. Rima Mercardo, a hospitalist, worked with Ronnie to understand what was happening with his insulin pump and his blood sugar levels. They also called in a consultation with a certified diabetes educator—Rebecca Wise, RN, CDE, who provided additional information about managing his highs and lows, and connecting Ronnie to a network of support after hospital discharge.

Rebecca works with patients on an inpatient and an outpatient basis to help manage diabetes. In addition to individual consults, Diabetes Education offers a free monthly community class for anyone interested in learning more about preventing or managing the disease.

Even with her 26-year history of working with people with diabetes, Rebecca said she was very concerned about Ronnie when she met him and learned more about the challenges he faced with his insulin levels.“The first time we met was when he was in the hospital after he experienced an emergency,” said Rebecca. “His levels were totally out of range, and were dangerous to his health.”

Ronnie was selected to participate in a pilot population health program at Self Regional to help team members who need assistance managing challenging health concerns. The program, which started in February with 50 team members, offers personalized diabetes education and nutrition counseling, personal physical training and a membership to Wellness Works, the community wellness center for Self Regional.

In just six months, Ronnie says he has transformed his diet and his activity levels to allow him to manage his diabetes—for the first time since his initial diagnosis in 1977.

The changes aren’t as obvious on the outside as they are on the inside. He laments the fact that he hasn’t lost weight, but he has lost 9.5 inches and lowered his body fat by two percent. Even more impressive, he has lowered his A1C levels from 10.8 in July to 5.7 by November, which represents meeting a target level of less than 7. A1C is an indicator of average blood glucose levels over a period of several weeks.

“I am religious about reading food labels,” he said. ” I look closely at all the ingredients—it takes me twice as long to grocery shop now. If I see anything that says ‘enriched’, I put it down because that means it’s not a whole grain. I cook my meals—there’s a lot of chicken involved in my diet—and I’ve tried things that I had never dreamed of eating before. Last week, I tried sweet potato nuggets, which are surprisingly good.”

At least five times each week, Ronnie now does a mix of cardio workouts and weights for at least 60 minutes. The lifestyle changes have diminished some of the side effects of diabetes he used to experience regularly, including mood swings and irritability that came with spikes to his blood sugar.

“My quality of life has changed…I feel like I will have more quality time with my children,” he said. “When I get home, I have so much more energy to do things with my family, whether it’s getting more involved at my church or going fishing with my teen-age daughter out by our house.”

He has also made major improvements in his cholesterol and triglycerides. Rebecca said he’s done such an impressive job that he has almost reached levels of a person who has pre-diabetes, instead of someone who has spent most of his adult life struggling with the disease. Soon, Ronnie may be able to reduce his insulin to use rapid acting insulin instead of the U500, which will also help cut his healthcare costs.

“It can be done if you listen to what they tell you,” he said with a smile. “I’m living proof.”

Read our Diabetes Fact Sheet  for more information about the different types of diabetes, risk factors, symptoms and management.