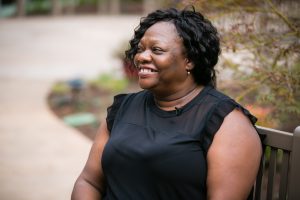 In September of 2013, Donna Laymon had her yearly mammogram at Self Regional Healthcare Cancer Center. She scheduled it for a Friday morning and took the day off from work so that afterwards she could enjoy a long weekend. However, Donna’s routine mammogram showed some abnormalities and she was asked to return for some more tests. More tests led to a biopsy, which led to a breast cancer diagnosis.

“After I heard the word ‘cancer,’ I thought that this was the end for me,” Donna said. “I just shut down.” It wasn’t until she picked up a paintbrush that Donna began to let herself hope. “Once I started painting – it’s like everything changed,” she said. “I was able to listen to my doctors, family and friends and, most importantly, I was able to believe them when they said that I was going to be ok.”

Donna painted throughout her treatment – through surgery, through six weeks of daily radiation treatments and through her months of recovery – and she’s still painting today, healthy and cancer free.